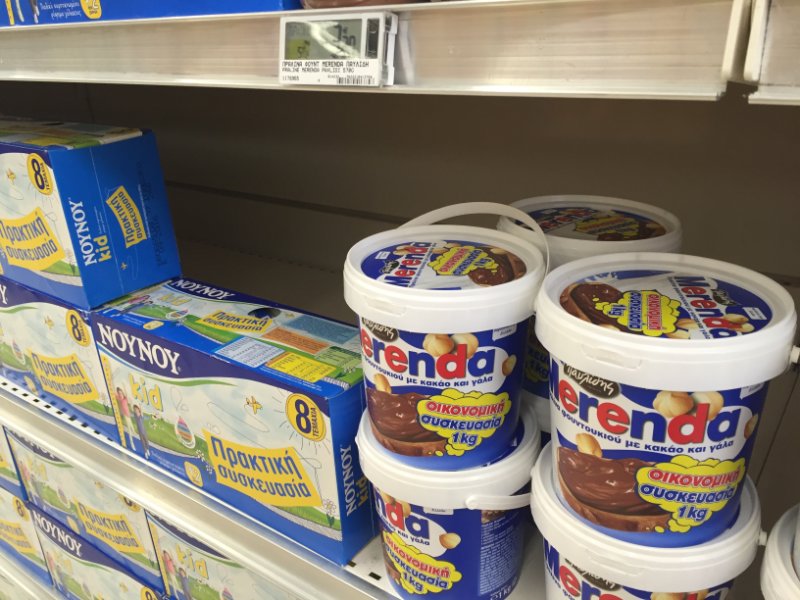 In the weekend I went for groceries, to one of the largest supermarkets in Athens. It’s the one I’ve been going for quite some time. As you can see from the picture above, the shelves are full of products. But take a closer look and you will see that behind the first row of products, the shelves are actually empty. And if you take an even closer look, you will discover that only one specific product is available – and not the full product line. And it’s not just this supermarket – the same picture could have been taken at most of the Greek supermarket chains during the last couple of months.
Clearly the supermarket industry in Greece is in trouble. One obvious reason is because of the capital controls imposed in July, which have severely hurt the cash flow of the retailers. But if you look a little deeper, you realize that most of the industry was over expanded (opening up stores just about everywhere) and overleveraged (to finance this expansion) even before 2010 (the year the crisis officially started in Greece). Therefore, a correction was much needed. And this could help explain the recent M&A that has been taking place. But what is happening now is more than a correction: it has cut deeply, to the bone. Since 2010, demand has fallen, because disposable income has dropped (and in some cases tanked). People now simply buy what is only necessary – and sometimes not even that.
It’s more or less, the same with the Greek economy. If you take the high level view, then things look regular, almost business as usual, a “normality” of sort. After all, with 3 major and difficult deals in the last years to keep Greece afloat, things surely are not that bad…one might be tempted to assume.
But if you take a closer look (behind the first row of the shelves), things are quite different. The Greek economy has contracted 25% during the last 5 years. By the way, that is more than what the US economy contracted in the Great Depression and more than Germany in the 1930’s. The 3 MOU’s did leave Greece in the Eurozone (the shelves have at least some products) but at a great cost (shelves are in essence empty).
I also observed another thing. It was Saturday. It was supposed to be full of customers and energy. Instead, the feeling was quite different. Yes there were customers but definitely not what used to be (even during the last year) – and definitely not what you call enthusiastic.
So why it has come to this? The answer is at the way the Greek issue has been so far managed by all parties concerned: the fundamental problems facing the economy have not yet been resolved – let alone addressed. The emphasis was on fiscal consolidation, which basically means increased taxes and reduction in wages. To use another word, austerity. And no investments in sight to offset the austerity measures. The result: disposable income has dramatically reduced, demand has fallen, income has decreased for many sectors, growth stalled. Economics 101 – and empty shelves.
On a final note… Looking at these pictures, made me think when I first saw sights like this: it was back in the early 1990’s, in Eastern European countries that were making the transition from communist regime to free market. But I remember quite vividly something else in the places I visited. It was the mood, the energy, the determination of getting away from a failed model and trying (experiencing would be a better word) the free market. You could it sense it everywhere and in anything. The result: just take a look now, for instance, at Poland, Romania, Slovakia, Czech Republic.
And economics, as anyone will tell you these days, is about feelings, sentiments, behaviour. It’s about psychology – and not only the numbers. Just take a look at those shelves.
So much for supermarkets – or economics for that matter.

This website uses cookies to improve your experience while you navigate through the website. Out of these, the cookies that are categorized as necessary are stored on your browser as they are essential for the working of basic functionalities of the website. We also use third-party cookies that help us analyze and understand how you use this website. These cookies will be stored in your browser only with your consent. You also have the option to opt-out of these cookies. But opting out of some of these cookies may affect your browsing experience.
Necessary Always Enabled
Necessary cookies are absolutely essential for the website to function properly. This category only includes cookies that ensures basic functionalities and security features of the website. These cookies do not store any personal information.
Non-necessary
Any cookies that may not be particularly necessary for the website to function and is used specifically to collect user personal data via analytics, ads, other embedded contents are termed as non-necessary cookies. It is mandatory to procure user consent prior to running these cookies on your website.
SAVE & ACCEPT
Translate »